The drama around Fortnite – Battle Royale has, as far as I can tell, only been a good source of press for Epic Games, and it’s got people ready to give it a go, even if it’s just to say it isn’t anywhere near as good as PlayerUnknown’s Battlegrounds.

Evidently, there is no such thing as bad press….

Fortnite was a game, released not too long ago that I knew existed, but I didn’t really know what it was about, or particularly care.  It was getting lukewarm reviews, and whilst it looked colourful and fun.  I didn’t have any interest in working out what it was about.

PlayerUnknown’s Battlegrounds, on the other hand, is a game that’s become the PC go-to online game of choice, for seemingly everyone streaming and hosting gaming sites. Rave reviews, a big community that loves it, and the promise of an “exclusive” (the meaning of that word is unclear at this point…..) release on Xbox One has gotten people, myself included, really excited to get into it and see what all the fuss is about.  It’s premise is simple, you and 99 other players all get dropped onto an Island, then it’s basically the game of the “Battle Royale” movie.  Collect weapons, survive and be the last person standing.  Genius!

Problem is, there’s no proper release date for consoles, and people want to play it.

The other problem, is that Fortnite didn’t do particularly well.

What the team at Epic Games did next is (in my mind) a stroke of genius, albeit perhaps a little sneaky.  They released a free to play, “Battle Royale” mode for Fortnite, on all platforms.  It’s essentially the same gametype as Battlegrounds, but with the quirky graphical charm of Fortnite and a building element.

Let’s be fair, this is probably one of many games jumping into the “Battle Royale” gametype, it’s just a much higher profile company making the jump, than some other indie devs trying to make their way into the market.

My frame of reference leaves a lot to be desired.  I’ve only watched gameplay of Battlegrounds, and I have next to no knowledge of Fortnite at all.

So I’m essentially going in blind.  I know I’ll be alone against 99 others, I know we’ll scramble to get weapons and safety, whilst slowly being pushed together by the ever decreasing map size, and I know that I need to be careful, any noise could give me away to someone nearby.

I started out, jumping out of the bus, and tried to head off out of everyone’s way.  I was successful! Found a shack and a gun, and started to try and understand the buttons.  It’s very simple, but I didn’t really get my head around it.  I went on a stroll, trying to get familiar with the map, and found myself being caught in the “storm” (the outer limits of where the map is shrinking).  This started to damage me, but I luckily got out.  Only to find myself killed shortly after.  Uneventful, but I finished 31st out of 100, so I figure that’s not too bad? 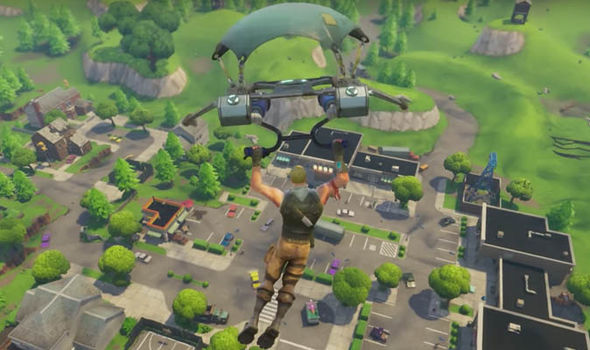 So I started my second game, with a slightly better understanding of the controls and how the game feels.  Again, heading away from everyone to relative safety whilst I could find weapons and hopefully get the drop on someone.

A mooch around, some investigating, and then I decided to press further into the map to see if I can spot anyone to kill.  Then, there they were………someone else just like me, lonely, running and presumably hoping to stay safe and kill someone.  I followed them at a distance, and did my best to keep up.  They approached a building, so I stayed out of the way, hoping to get up-close when they least expected it.  Shotgun out, I was ready to roll.

They ran past me and continued across a bridge.  I was ready to strike, so I got closer, and followed.  Then, they turned around……..did my footsteps alert them?! I don’t know how they knew, but they knew.  Shotgun at that range?! Not good, but in my panic, changing weapon seemed to be impossible and slipped from my mind.  I got a few shots to connect, but with minimal damage.  Then it struck, I knew how to change weapon.  Pulled out a pistol, and boom, I got the kill!

In all this time, it never occurred to me that there are others out there.  I was laser focused, and then the adrenaline kicked in, and everything else was forgotten…..

I collected their dropped weapons and ammo (and building materials), and confidently strode forward to find a new victim.  Apparently, I thought I was good at this game now……

I headed towards a bunch of buildings, and expected people to be near, so I tried to be cautious.  Just not cautious enough.  Seconds later, I was shot and killed from a rooftop.  That was it, round over. 29th place.

Straight off the bat, this game looks great.  Bright and colourful, I really like the style, and to be honest, it helps you come to terms with the fact that you’re on your own, and fighting for survival.  It’s an interesting juxtaposition.

The building aspect is interesting.  I knocked down a tree, got some wood and built some stairs up into a tower.  I put up an additional internal wall in a building.  I could see that these functions could be great for some tactical play, but I’ve not had time to give it a proper go yet.  It’s simple and straight forward, and probably adds a dimension to this style of game, that helps to set it apart a little.

Gun play was weird.  I didn’t really feel any weight to the weapons.  I know it’s not a realistic game, but shooting just doesn’t have a “feel”, it’s a little be of a hollow experience, and by far the least satisfying element of the game in my few minutes of experience.

I didn’t get chance to play with a squad, although I could see this really mixing games up a bit.  I’m looking forward to giving it a shot!

The ever-shrinking map is something I wasn’t very wary of, and nearly suffered for it in my first game.  I learnt a lesson though, and I suppose that’s a good thing.  I definitely see the point.  Imagine only 2 people left, and there being a whole map to find each other.  It would never end.

One thing that really stood out was the lack of score out background music of any kind.  It really pushed the feeling of being alone.  Initially, I chalked it up to making it feel a bit hollow, with not atmosphere.  But I think it’s by design, and actually, it works.  I think I should try playing with all the audio coming through headphones, see if I can hear more of what’s happening around me.  We shall see!

All in all, I see a lot of potential fun.  Quick 20 minute matches, and a feeling that every game could end up being pretty unique.  It’s exciting, it’s accessible, and it’s available for free right now on consoles.

Until Battlegrounds is released on Xbox, this is going to have to do, and frankly, it seems like a pretty decent trade-off.