The original Mirror’s Edge was a bit of a surprise to me.  I’d read a few good things, but it seemed to come out of nowhere, with not so much fanfare as a modern release tends to have.

I borrowed it from my brother and flew through it, having a really good time.  It left me with a strong impression and a positive outlook on the title.

Now, the sequel has been released……will it live up to my rose-tinted memories?

Following what can now only be described as a tradition, I managed to get this game through my other brothers’ game-shared library on the Xbox One.  Seeing it, I had to give it a go, remembering the fluid movement, the vivid colours and the fun, futuristic world.

Set after the events of the first game, and some tie-in comics (I haven’t read them), Faith is released from “Juvie” and you get straight back to business.

My memories of the first game were such, that Faith is a messenger, free-running from point to point to hand-deliver items and messages.  Evading the major corporations and electronic communications.

There’s no real mention of that here.  It looks like I’m straight back into the thick of things, going up against Kruger and stealing all kinds of stuff.

This time, the whole city is accessible, so you get yourself from point to point, often times having a long way to go between missions.  Of course, the city is only accessible from the rooftops, but you have a massive area to explore and what appear to be hundreds of side-missions.

Great, free-roam, loads to do!  So far though, all quests seems to be exactly the same.  Sure, the premise is that of free-running and getting around quickly on the rooftops, but all the side quests, regardless of what “type” they are, amount to “get here quickly”.

At least there are pre-rendered cutscenes and ongoing dialogue between characters when it comes to the main story missions, so it’s not all the same. 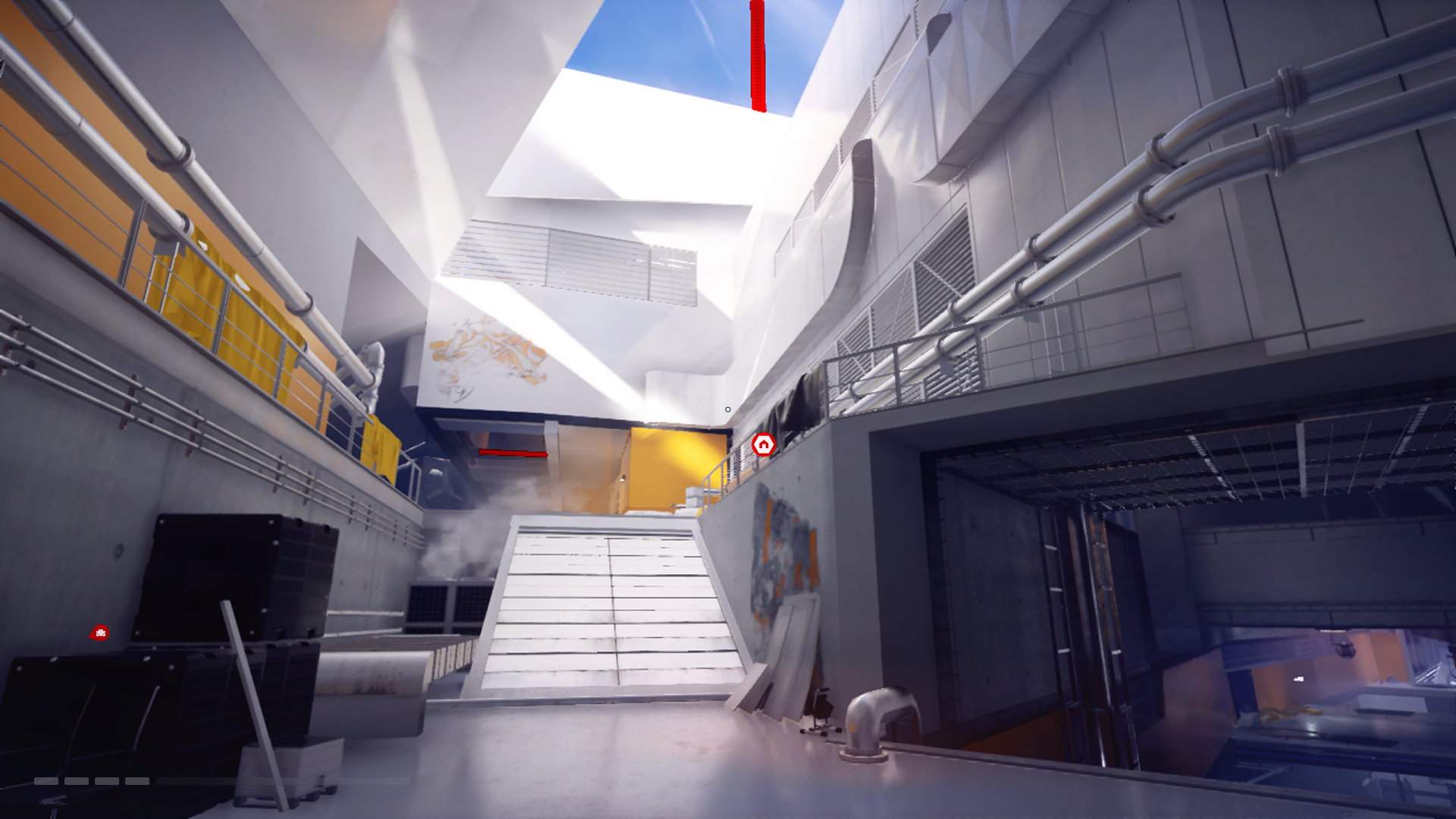 So far, the world has the same futuristic feel, super whites and bright, bold reds, which work really well for me, being colourblind.

The movement feels the same, as far as I can tell, although there are new options to improve and increase the flow of movement from moment to moment.

Faith is still the protagonist, and I have no recollection of the other characters, but I’m sure some of them have returned……

So far, it feels really good, and the satisfaction of moving, and flowing around the city is great.  The added abilities, and the use of upgrade points gives you a sense of progression, and you always feel like you’re improving.

The movement is incredibly unforgiving, I die, a lot.  But that’s good, I think 99% of the time, I die because of my own mistakes, not because the game is unfair or because map layout is poor.

Combat, although I get overwhelmed easily when it comes to groups of enemies,  is great fun.  I love taking people out, and the dancing around them, knocking them off buildings, high-jumping and kicking them in the face.  Very satisfying indeed.

As much as I love the aesthetic, there are some really fuzzy textures, on faces, on walls, on objects.  It’s weird.  How can a modern game on the current-gen “HD” consoles have such poor textures?  It isn’t always, but it’s definitely noticable.

Considering everything is all sharp lines and super-modern, everything beyond your immediate surroundings looks a little ropey, the draw distances are quite poor.

Side-missions…….seriously? So far, I’ve tried to do a variety of different missions, but they have all amounted to just getting from point A to point B within a time limit.  Great. I get that it’s the core of the game, but I had hoped to see a little expansion of that gameplay, and maybe change it up a bit. 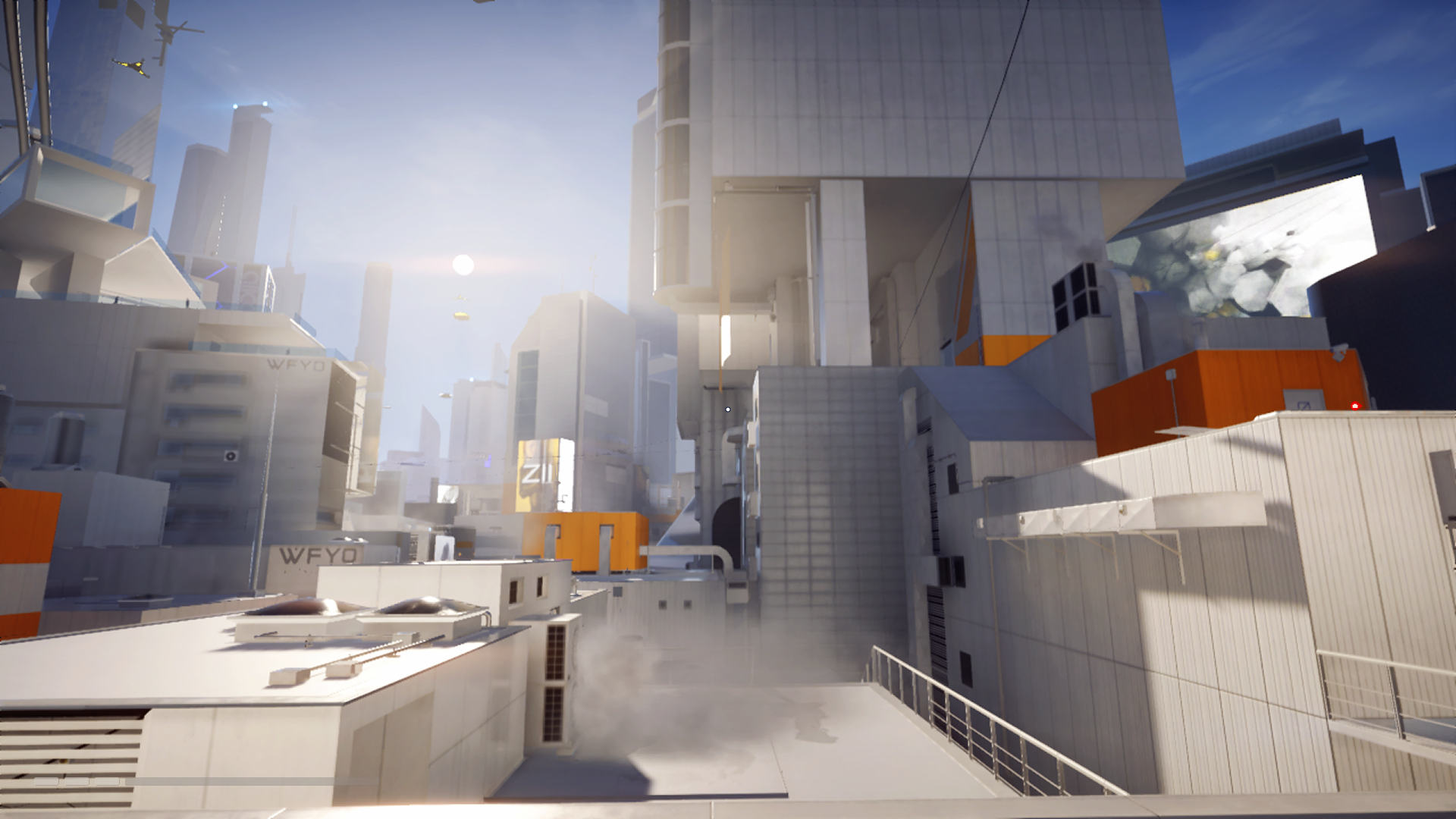 I’m trying to focus purely on the main story at this stage, unlocking items and accessing new parts of the city as I go.

Hopefully I’ll see some new types of challenge in the side missions.  Perhaps some combat challenges?

Apparently, even though I’ve just finished Deus Ex Mankind Divided, I haven’t finished with climbing into vents and moving around stealthily in first-person……